We closed our Mason & Taylor site at Bethnal Green Road, E1 on 23rd September 2012. Thank you for all your support over the past 2 years, it's been really appreciated. We've loved meeting you all and serving craft beer to the beer lovers of East London and beyond.

We will be announcing some exciting news about our new location and other developments soon. In the meantime, please do come and visit us at our original site, The Duke Of Wellington at 119 Balls Pond Road, London N1 4BL. And if you find yourself in Yorkshire, we have sister venues in Leeds, Whitelock's Ale House and The Deramore Arms in York.

Our former Bethnal Green Road site is in safe hands, where BrewDog will be welcoming London's craft beer fans at their BrewDog Shoreditch site from late October 2012.

Thank you once again, we've been humbled by your support these past 2 years, and we hope to see you again soon!

As big fans, we’re delighted to see bottled beers from Kernel Brewery popping up all over  East London.  In Dalston alone the fine people at both Café Oto and A Little  Of What You Fancy are supporters, and soon we’ll be selling three of their bottled beers here at Mason & Taylor.

Evin, the brewmaster at Kernel, brews beer with character and explains his intention is to brew  “beer that forces you to confront and consider what you are drinking”.  They have huge characters that we’re more used to finding in bold American beers.  Their Pale Ales and IPAs produced with single hop varieties, like Amarillo, Citra or Cascade, are allowing us to appreciate what difference a single hop actually makes to the taste of a beer.

With new world wine helping the consumer understand what grapes go into wine and what character they impart, beer is undergoing the same revolution and the American influence is central to this once again.  Our whole team are heading down next week to see Evin in action at Kernel.  Kernel are open to the public on Saturdays, and we encourage you to pay them a visit! 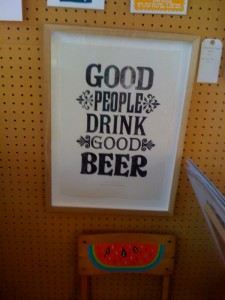 This entry was posted in News and tagged beer, Kernel, Southwark, suppliers. Bookmark the permalink.